With so many species of begonias, and so many thousands of new cultivars, it became important along the way for growers to categorize their begonias in hopes of making things simpler. One thing to keep in mind, though, is that with so many cultivars combining their parent’s characteristics, these categories can get a bit blurred.

Cane-like begonias are named for their new shoots growing straight and unbranched out of the crown of the plant. Once they reach a mature size, they begin to branch. At first they may look like Bamboo, hence the name cane-like. Cane-like begonias range from a few feet tall to over ten feet tall but they all have in common those tough stems with a bamboo-like appearance. 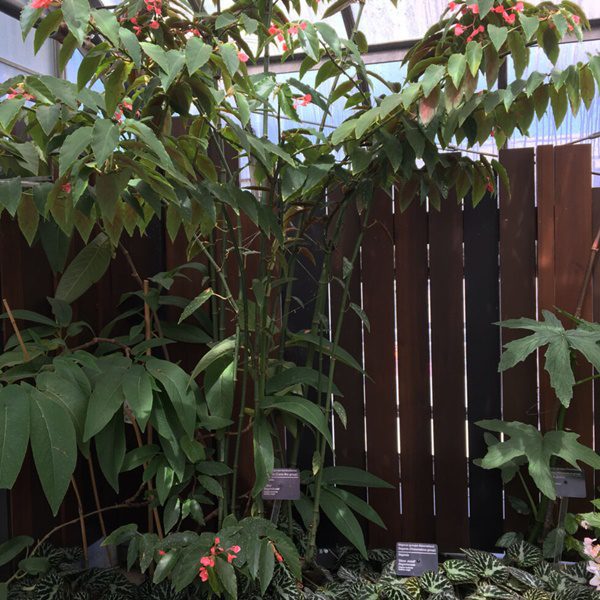 B.‘Elithe’ shows a typical cane-like growth habit with long upright stalks which begin with no branches and only form branches as the shoot gets above the canopy and into the light. The shrub-like growth habit of B. metallica is a good example of this category. Like a cane type they can get quite tall however they begin branching right from the start, the stems interweaving to create strength and an overall much bushier plant.

Lacking a bamboo-like or cane-like shoot, the shrub-like types (911 species and 743 cultivars) look somewhat similar to cane types when mature, however they branch constantly, forming a bushier plant. Mostly are fairly large growing plants, with matte green leaves rather than the glossy leaves that are common with cane-like begonias.

Semperflorens means ‘ever blooming’ in Latin and these begonias (20 species and 1000 cultivars) are probably the most widely grown Begonia. Due to their thick waxy looking leaves, they are often called “wax begonias”. These begonias are grown mostly as bedding plants and as potted annuals but can be a perennial in areas that do not freeze. Rhizomatous begonias offer a dizzying array of shapes and colors, they are named rhizomatous because they their stems often crawl along the ground rooting wherever they touch, as seen here in B. karwinskyana. Some rhizomes are thick, some very thin, some climb, some move along under the soil surface.

The rhizomatous types of Begonia (1098 species and 4019 cultivars) are defined by their ground-hugging stem (rhizome). Most are grown for their interesting leaves and ease in containers, but some have the added bonus of a massive display of flowers that can cover the whole plant. Blooms usually start in spring, but some bloom all year. Flowers may be found under the leaves, on the leaves, or on long stalks well above the foliage.

Rex begonias (1 species and 4161 cultivars) are a type of rhizomatous Begonia and grown for their intensely multicolored leaves. The leaves come in shades of red, purple and silver, patterned and iridescent, and every size and shape. All Rex Cultorum types are descended from the Indian species B. rex that was crossed with other types of rhizomatous begonias. Rex begonias do bloom but are not grown for their blooms as they pale in comparison to their spectacular leaves. The species Begonia, Begonia rex, was discovered in 1850 and gave rise to all the colorful hybrids we have today. Begonia rex is actually a rhizomatous Begonia, but it had such a striking leaf color and was crossed to so many other kinds of Begonias that it developed into a class of its own. The original species (seen here) has the classic ring of silver on each leaf, but gives little hint as to what colors the hybridizers would create over the next 150 years. Pendulous tuberous hybrids in a California greenhouse, these are just one type of tuberous begonia. The ancestors of these hybrids came from Latin America and clung to the hillsides near Macchu Picchu and other high elevation areas.

The tuberous type of Begonia (335 species and 4354 cultivars) became very popular around the world in the early 1800’s. The evolution of a tuber occurred worldwide in begonias, so there are many types of tuberous begonias. The ×tuberhybrida group, are primarily descendants of begonias found in Latin America and the foothills of the Andes. In some countries such as England, they remain one of the most popular types. The ×tuberhybrida types are grown for their flowers which can range from small, 1/2 inch flowers, to the large exhibition types that can have flowers 10-12 inches across. However, many Asian tuberous forms have also emerged and are quite different from their new world counterparts.

These begonias (0 species and 470 cultivars) are complex hybrids of polyploid tuberous begonias and Begonia socotrana from the Island of Socotra (with maybe a dash of B. dregei, B. semperflorens, and B. grandis subsp. Evansiana). Cultivars began appearing in the late 1800’s, and were noted for their winter blooming, as opposed to the spring and summer blooming of tuberous begonias. The ×hiemalis type begonias come from crossing Begonia socotrana with an ×tuberhybrida Begonia, which gives a winter flowering hybrid with tons of color and is tolerant of indoor conditions. B. crassiculis Thick stemmed begonias are a bit confusing and not all agree on the classification, but in general they are upright stems, poorly branched and densely leaved, slowly losing the lower leaves until the branch structure is revealed.

The thick-stemmed types (81 species and 111 cultivars) all have very thick stems. Most thick-stemmed begonias don’t branch much but send up new growth from the base. They also show off the thick stems, as they drop their lower leaves and have leaves only on the tips.

An often-overlooked group of Begonias, the trailing types are the vines and ground covers of the Begonia world. Many are very tough and make great patio and houseplants, others are bit more difficult to grow or require a terrarium, but in any case, there are some wonderful plants to choose from (126 species and 100 cultivars). Many are excellent hanging basket plants and will produce a cascade of interesting foliage and flowers either indoors or out depending on your climate.

More on Trailing, or Scandent, Begonias Begonia radicans is a beautiful trailing or vining species that has been used to make many wonderful hybrids. It is a heavy flowering species in the spring into early summer. Photo by Ross Bolwell.