The Odd and Beautiful B. wollnyi 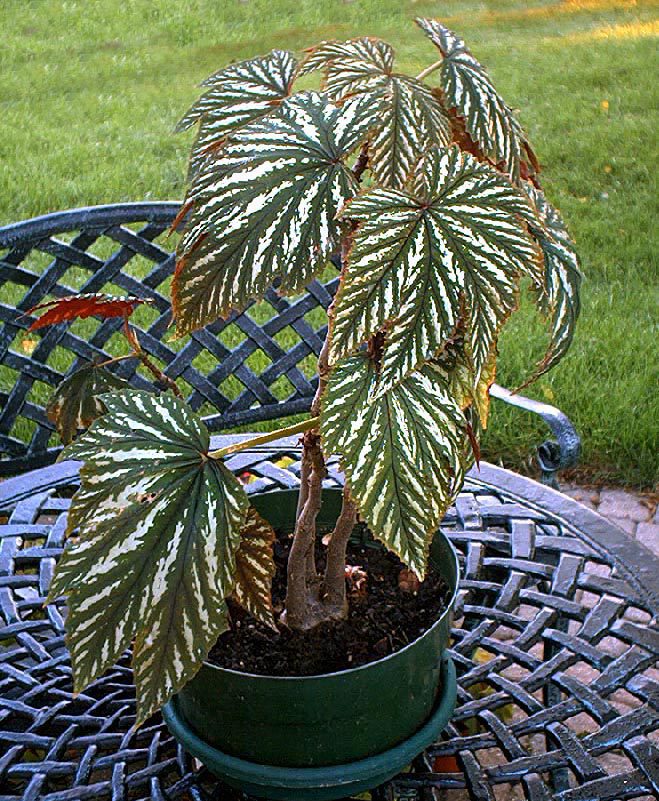 My husband accuses me of only having kooky people as friends, and I must confess he’s right although I prefer to think of them as bright, quirky, and interesting. I find that my taste in begonias must run in the same direction. I realized this when someone said to me of B. wollnyi, “But, of course, it’s not very pretty.” I was stunned because in the eye of this beholder B. wollnyi is not only beautiful it is fascinating.

In my mind, I group B. wollnyi with the “tree trunk begonias.” For me, as it ages it has a smooth lower trunk to about ten or twelve inches and then there are usually a few branches. The real appeal, however, is the swollen base which is so reminiscent of our trees here in the Ozarks whose lower trunks swell and rise as they outgrow the thin top soil and cannot penetrate the rock base below. I prefer B. wollnyi for bonsai over other begonias that share the trunk-like feature. The B. dregei group are almost perfect, but have the dreaded mildew problem. I have never experienced mildew on B. wollnyi. It is less finicky than B. ludwigli which it resembles in some ways and the trunk grows faster. My B. ludwigii is three years old and the trunk is still fairly short, it’s leaves are really too large in size for it’s trunk to be a proper bonsai. B. leathermaniae has the same problem, plus it’s trunk quickly grows too tall and develops the cane-like nodes.

For me, both B. wollnyi and B. ludwigii go completely dormant in the winter and therefore can sail through the unpleasant winter conditions I have for them. Both can take the warm central heat and, indeed, seem to flourish in the spring because of the rest. B. wollnyi can also take the cold, however, where B. ludwigii cannot. Both of these begonias share a characteristic with B. crassicaulis that I also find appealing. B. crassicaulis is one I have never seen grouped with these trunk-like begonias, but the ones I have grow straight up and the bare, winter trunk is very reminiscent of a fat palm tree. What all three of these share is that they lose their leaves and then, in late winter or early spring, send up their lovely flower clusters from bare trunks.

My first B. wollnyi plants were raised from seed fund seed planted in the winter of 1991-92 and they have in turn produced seed. Raising little B. wollnyi is quite easy if one trick is observed. 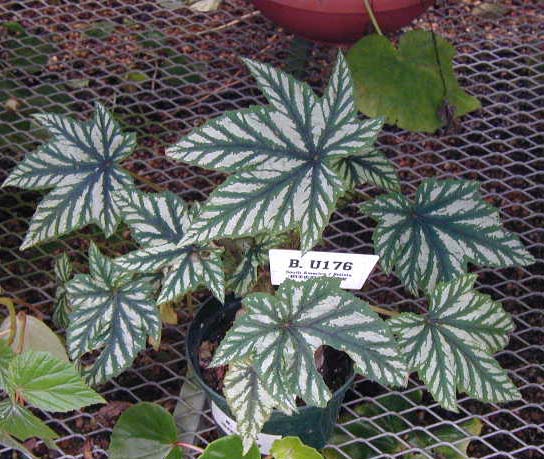 They should be planted in winter in order to reach a size by the following winter that they can survive dormancy. I planted seed as soon as they were harvested in the spring of 1994 and had a regular little forest going by the next winter. They were looking great under a long-day light setup which I thought would fool their calendar. Not so, the entire forest suddenly shed its leaves one week. Only about half recovered. I have one seedling this winter that has not gone dormant under cool, humid conditions. This may indicate that under greenhouse conditions dormancy could be avoided.

My B. wollnyi are summered outside with no particular attention. Most of our summers are not hot, our highs are usually in the upper eighties. I suspect they would not like extreme heat since they probably originated in the mountains. Mildred Thompson lists B. wollnyi as coming from Bolivia in 1909. B. williamsii, a synonym, is shown from both Brazil and Bolivia. In her book, it is listed as “tuberous/semi-tuberous”, but her 1994 Update observes a revision to “thick-stemmed. trunk-like, non- ramified” which places it in the same category as B. ludwigii.

B. wollnyi has 28 chromosomes and all the hybrids I found listed were with rhizomatous begonias except two with B. malabarica. All the off-spring are also classified as “thick-stemmed, shrunk-like” except one, B. Speckled Runabout’, which is classed as “semi-tuberous.” Thus I suspect the trunk-like feature is dominant. B. Silver Comet’, a cross with B. carriae pictured on page 57 of the 1992 The Begonian, is particularly lovely. B. wollnyi itself is shown on page 221 of the 1991 The Begonian and earlier on page 180 in 1970. Both of these have black and white photos which cannot capture one of B. wollnyi‘s best features, it’s colorful leaves. They are a bronzy green, splashed white, and palmately lobed. The veins are raised and almost purple near the sinus.

This Begonia is a bit mysterious. It is not mentioned by Chevalier, L. H. Bailey, Brillmeyer, or Haring. Thompson does not give any history on it and The Begonian references are just seed fund listings or descriptions. So, B. wollnyi – quirky, interesting, and adaptable, has all the qualifications to remain among my roster of best Begonia friends.

Freda Holley grows and writes about begonias in Ozone AR. She is also the editor of The Begonian.