Leslie was raised by a farming family in the depression era of American history. He was unable to go to school because he needed to work so his younger siblings could go instead. But Leslie loved working with plants, and from his mother inherited a gift for growing and hybridizing them.

Leslie Woodriff, became part of the American Begonia Society within a year or two of its formation and continued to breed begonias from the 1930’s until he passed away in 1991. He was well known around the world for his breeding in begonias as well as in lilies, and renowned for making crosses that were technically impossible according to most plant breeders of the time. Leslie bred the lily ‘Stargazer’ which is still one of the top selling lilies in the world, with over 36 million bulbs sold annually.

In the 1930’s, when Leslie began working with begonias, finding plants to breed with was difficult and plants had to be hand carried from their countries of origin and maintained in primitive greenhouse structures. So it was important to be able to not only hybridize something new, but also to be able to maintain your original species for breeding each year.

Leslie was good friends with Alfred Robinson, Rudy Ziesenhenne, and Roy Berry; the nucleus of the American Begonia Society. Leslie also was in contact with the families in Europe that had bred the original Begonia hybrids from the first plants brought back from Asia and Latin America. Woodriff was always learning and exploring the possible crosses.

Leslie and his wife Ruth raised their children and had their nursery “Fairyland Begonia & Lily Garden” in California and Southern Oregon. Although much of his Begonia hybridizing work never was formally recognized, or registered, Leslie had 211 named cultivars on record. 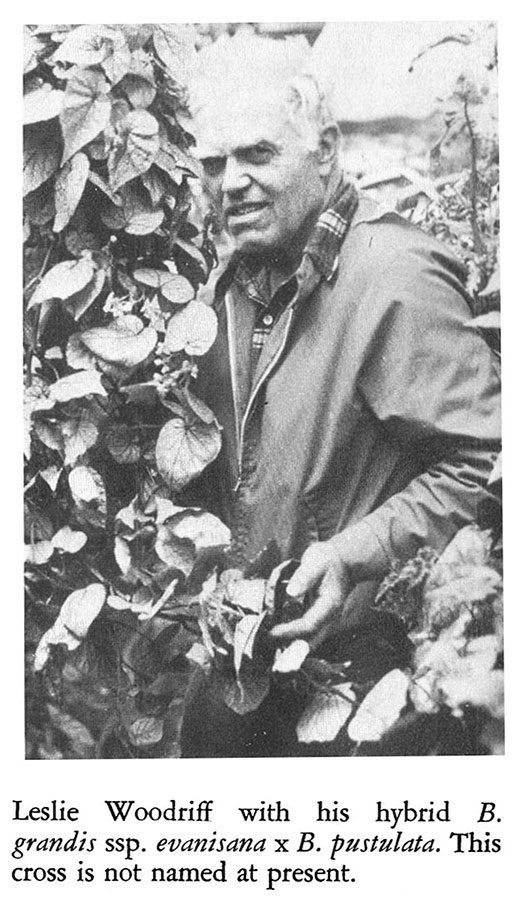 Leslie Woodriff posing with a hybrid of his which would later be named B. ‘Silver Cascade’. The Begonian, 1977. A collection of cultivars created by Leslie Woodriff.