The Begonia of the Socotra Archipelago

As Freda Holley kindly included my request for material of Begonia socotrana and its hybrids in a previous issue, I thought readers of the Begonian may be interested to read a little about the species by way of thanks.

I have been interested in the Begoniaceae since a field trip to Ecuador in 1997 where I saw many of the odder representatives of the family from the high Andean B. uricae to the rainforest giant B. parviflora. Since then, I have been lucky enough to study Begonia at the Royal Botanic Garden, Edinburgh as part of an M.Sc. and now a Ph.D.

My current interests are to do with the speciation of Begonia, and to why it is such a diverse genus with so many species. To investigate the evolution of Begonia species, I have been using DNA markers to look at how easily different populations of a species can become isolated from one another.

To look at population isolation, and over what kind of distances it happens in Begonia, I am using three species: two from the Socotra archipelago and one from South and East Africa (the commonly cultivated B. sutherlandii). Rather than go into “DNA details,” I would like to present a short account of the species from Socotra. 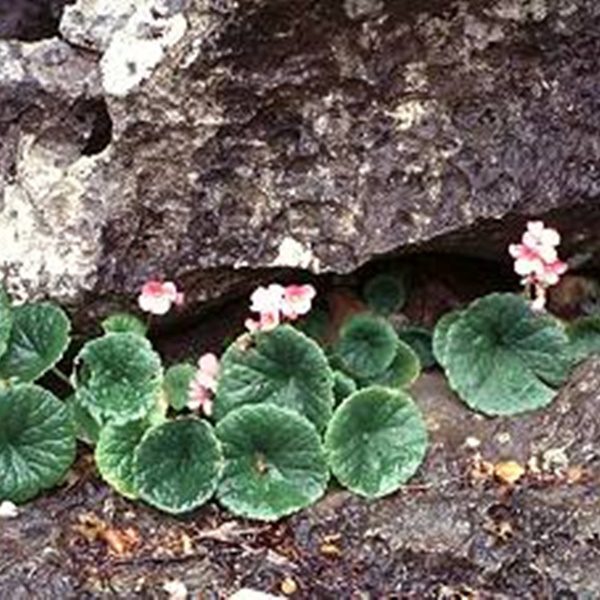 B. socotrana growing in a sheltered limestone crevice.

Until a few years ago, B. socotrana was the only known species from the archipelago, growing in the Haggier Mountains on the strange and isolated island of Socotra. It was discovered by Isaac Bayley Balfour, Regius Professor of Botany at Glasgow University on an expedition to the islands in 1880. The species was responsible for the production of the first winter flowering hybrids, as it flowers during the winter rains on Socotra, the two main winter flowering hybrid groups are B. x Hiemalis and B. x Cheimantha.

The position of the Socotra archipelago in the Indian Ocean

The B. x Hiemalis group was the result of a cross between B. socotrana and the tuberhybrida begonias, for example B. ‘Viscountess Doneraile’ which originated during 1865 from repeated hybridisation between four South American species (B. veitchii, B. veitchii (syn. rosiflora), B. pearcei, and B. boliviensis). The crosses were performed by Veitch and Sops of Chelsea in 1883.

The B. x Cheimantha group originated from crosses between B. socotrana and B. dregei followed by repeated back crossing and mutant selection. B. ‘Gloire de Lorraine’ was produced in 1891. It is very likely that all the current winter flowering hybrids and most of the species material of B. socotrana in cultivation derive from Balfour’s original collections way back in 1880, and it was in order to investigate this that I asked for the plant material.

The species is quite unique in the genus, and accordingly resides in its own section, Peltaugustia. It has circular, peltate leaves and shocking pink flowers, and it survives the island’s hot and dry summer by dying back to a cluster of tiny bulbils. It also seeks out the shadiest north facing cracks in the craggy and steep fountains and adjacent high limestone plateaus which help it to survive in such an atypical place for the genus. I visited Socotra in 1999 to survey the plant and collect leaves for DNA analysis and was very pleased to find the plant was far commoner than had been believed as several publications had listed the plant as severely threatened. However, the species is alive and well in the hard-to-reach mountains, and my survey has allowed the plant to be removed from the threatened list (after recommendations on the delimitation of conservation areas on the island have been made). 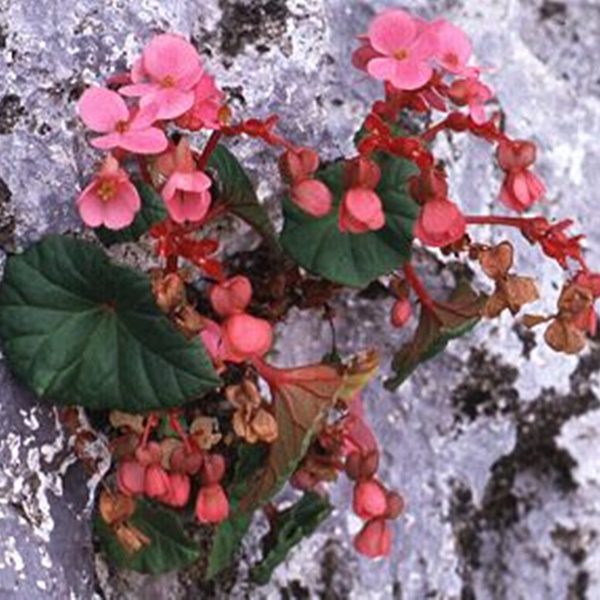 B. samhaensis M. Hughes and A. G. Miller, in ed. The drooping flowers on this plant are pollinated females; the fruit is swelling behind. Male flowers with four tepals are visible at the top to the picture 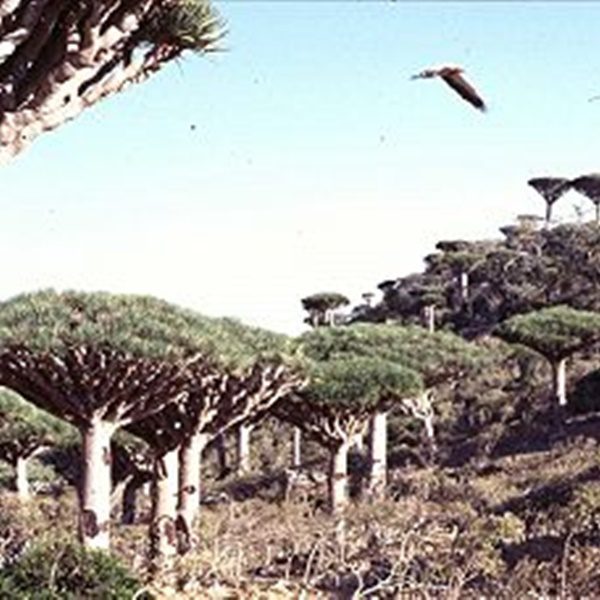 Dracaena cinnabari woodland at the foothills of the Haggier mountains on Socotra, where B. socotrana can be found. This impressive tree is one of the many unusual plants endemic to the island.

The second species from the archipelago was only discovered in 1996 by Vanessa Plana (also researching Begonia at Edinburgh), growing in a tiny area on the very pinnacle of the smaller neighbouring island of Samha. This island is an even more unusual place in which to find a Begonia than Socotra, as the island does not reach such a great height and is correspondingly hotter and dryer at its highest point. This species is obviously closely related to B. socotrana, as it also produces bulbils, has peltate leaves and pink flowers. However, it differs in several features of anatomy and morphology, including the presence of a woody tuber which must help it perenniate in its dry and exposed home.

B. socotrana bulbils. These sprout from the stem base at the end of the wet season, and remain encased in their dry papery bracts throughout the dry summermonths until the rains cause them to sprout.

The entire range of the species is a limestone block about 50 metres square, save for about 20 plants 500 metres away on a cliff, and it has been listed in the ‘vulnerable’ conservation category. The new Begonia has been named (B. samhaensis M. Hughes & A.G. Miller, in ed.) and described, and is due to be published in the Edinburgh Journal of Botany sometime in 2002. DNA evidence shows the species must have been separate from its sister on Socotra for quite a considerable time, and the two may even have been drifting apart ever since the archiplego became isolated from the mainland approximately 10 million years ago.