While many of the Hall of Fame members are honored for their skills at organizing the society, or scientific accomplishment, Irene Nuss was the embodiment of a community builder. She was everyone’s friend and humble but very knowledgeable. She was, at the end of her life, renowned for being a great hybridizer, and the hybridizer who built the foundation of the ‘superba’ cane like class of Begonia. Irene was lauded for her hybridizing, but she was more loved for her friendliness, her sense of humor and desire to share what she learned. 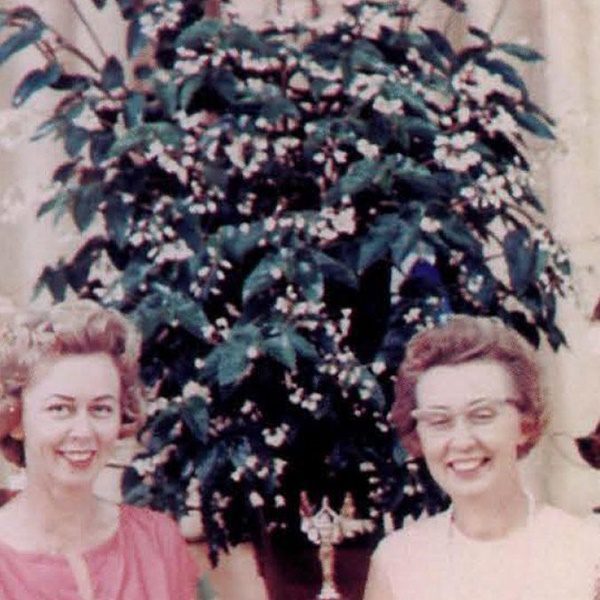 Irene was a special, faithful friend for forty+ years. Her ability to create so many long lasting and superb begonia hybrids was an amazing treasure to all who grow and love begonias. Tim O’Reilly remembers Irene as a special lady who always had a smile on her face and was dressed like she was going to a party. Hence his nickname for Irene was “Party Girl”. – Thelma O’Reilly, Margaret Lee Branch.

Irene was a member of the American Begonia Society for almost fifty years. Her tenure began in 1959 when she first heard about hybridizing begonias, and from there she learned quickly and produced enough new begonias to win the national trophy in 1969. In 2002, the Huntington Botanical Gardens created an award to celebrate Irene’s contributions to home horticulture. Irene shared the award with Rudy Ziesenhenne (her mentor) and Brad Thompson (her heir in hybridizing). 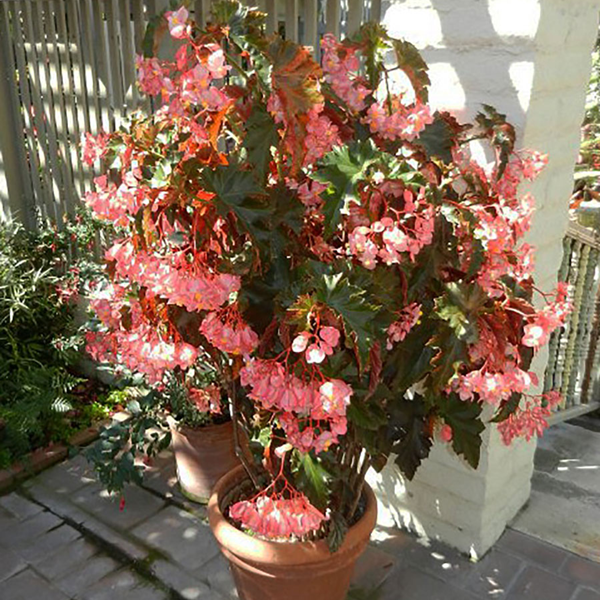 When I think of Irene, the famous hybridizer is not the first thing I think of. I remember mostly that she was always quick with a laugh or smile, quick to give a compliment, always friendly to everyone, generous with her time and knowledge, and easily embarrassed. Just writing about it I can picture her face turning red and the embarrassed smile that would follow. She was always very supportive of everything I did and seemed to be as proud of my accomplishments as if they were her own. I will miss her friendship and her sunny smile but for me she isn’t really gone because I see things every day that remind me of her. – Brad Thompson, Mabel Corwin Branch

Irene quickly became friends with Rudy Ziesenhenne, Louise Schwerdtfeger and others of the time. She had access to newly found species and most of the hybrids, thus, she was in hog heaven. Irene made adventurous crosses using B. dregei, B. rubriflora, and B. solananthera, to impart dwarf habits and bushier growth. Ultimately, Irene went back to her first major success, the Begonia ‘Kentwood’, and created about 17 other cultivars using ‘Kentwood’ as a parent. Irene was a creative and conscientious breeder. She was strict in her trialing, wanting to prove a plant first, and then worry about naming it later. Elda Regimbal was Irene’s friend and primary testing location for Irene’s begonias. Irene kept her releases limited to those plants which were distinctly different or improved, and her list of successes underlined that she was on the right track. 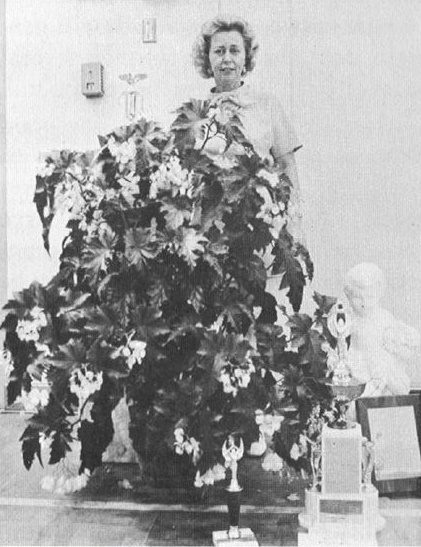 Widespread success with Nuss hybrids inspired an article in 1998 focusing on which of her hybrids did best in which quadrant of the US, with recommendations from Tom Keepin, Freda Holley, Annette Boree, and Kathy Goetz.

Irene Nuss is the reason I love cane begonias. I wish I had known her about 40 years ago. I always enjoyed listening to Irene speak. I wish I could have been around when she was doing all her hybridizing. It would have been so interesting to see her talk about her new crosses, how and why she used what she did and how she went about naming them and choosing the different crosses, and to see some of the ones she threw away. – Mary Sakamoto, Orange County Branch

Irene tried interspecific (species x species) crosses one time, and quickly gave it up because all the seedlings looked the same. This was expected, but not particularly exciting for Ms. Nuss. This one attempt, however, gave her B. ‘Eunice Gray’ for which she received the Alfred D. Robinson Award in 1972. Following, she preferred crosses where one parent was a species and one was a hybrid, as in these crosses there is a mix of seedlings with a general resemblance to their species parent. Irene also said, “and of course putting a hybrid onto a hybrid gives you great variation and interesting children”. Irene would again receive the Alfred D. Robinson Award for outstanding new hybrid in 1995, for B. ‘Silvermist’, 23 years later. 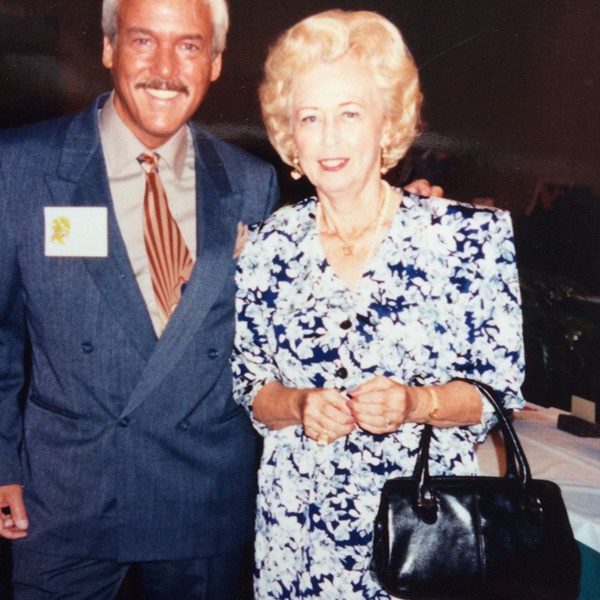 Irene Nuss was my mentor and my friend almost from the moment we met in July 1991 at the Westchester Show. By the next show I was Show Chairman but was afraid to enter any plants. Irene came to my house, looked over the collection, pointed to 3 or 4 and ordered me to put them in the show. One of those plants was her hybrid and Alfred D. Robinson winner, B. ‘Eunice Gray’ (Irene’s sister). Many of my first begonias came from Irene. I still have most of them. Her hybrids have passed the test of time. Irene is gone but her “children” live on. She will always be in my heart when I look at them and tend them. Irene Nuss is irreplaceable, but we can all be happy that we had her for so many years and she knew that we loved her dearly. – Janet Brown, Westchester Branch

Irene did not operate a nursery to sell her own plants, and she did not try to make money from her hobby. Her philosophy was “I just want people to grow my plants and enjoy begonias,” she says. “My royalties are the letters I receive from people telling me how much they enjoy the plants.” Back in her early days of hybridizing, Irene received so many awards for her cultivars, that she stopped entering in competitions to give someone else a chance to enjoy the spotlight. The memoriam to Irene Nuss in The Begonian in March/April 2011 is a wonderful tribute to a very engaging and real person who bred begonias, but collected many, many friends. 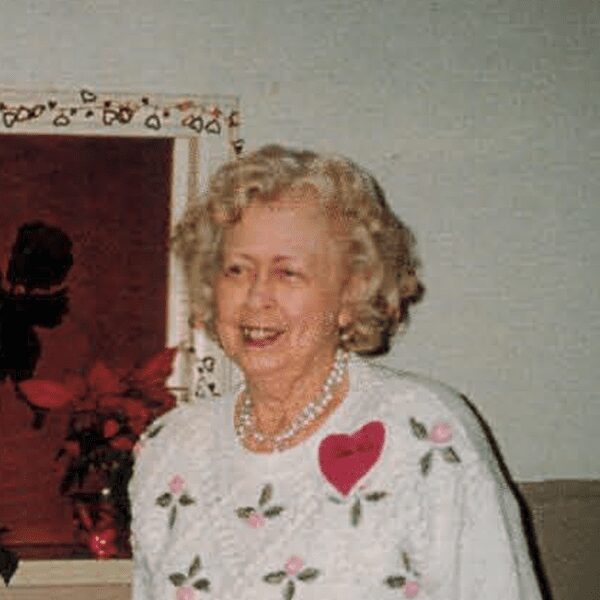 Irene was very close to her son Kent, and moved to Sacramento shortly before she passed to be close to him. He had been a supporter of her hobby all through his life, and asked that as a memorial to his Mom (in lieu of flowers) that everyone instead ship cuttings or plants of Irene’s hybrids to Sherman Gardens in California.