I went on vacation in July 2001 with my wife and my five and a half year old little girl in the Chapada Diamantina mountain range in western Bahia State in Brazil (My older son, 19, isn’t interested in nature. His interests are his computer, the internet, his rock group — he plays the guitar — and NBA basketball).

The region, about an hour from Salvador by small plane, owes its name to the fact that it is rich in diamonds; some hand mining is still done, although the use of machines has been prohibited as the region is now a National Park. Chapada means a plateau covered with low vegetation. During a first walk my wife spotted a few sterile plants of a begonia. Later, on a long walk alone, I found a beautiful flowering plant of it growing in full sun in sandy debris among rocks.

I even saw one growing next to a cactus, but it was in an inaccessible place and I didn’t have a lens long enough to get a good photograph of it. Actually there seemed to have been 2 species growing together. On the return from a long hike, when I was already tired, I noticed that one plant had both peltate-orbicular and cordate-orbicular leaves, on different stems. I found it strange but, as I was tired, I didn’t take a picture.

I collected young plants, not knowing that they were different; now that they are growing, I have plants with each type of leaf, the peltate ones being glabrous, the cordate being stellate-tomentose. Looking in Begoniaceae by Lyman B. Smith et al. (Smithsonian Contributions to Botany, number 60), I found that the peltate form is probably B. umbraculifera; the other form shown in the cover photograph is most probably B. grisea. 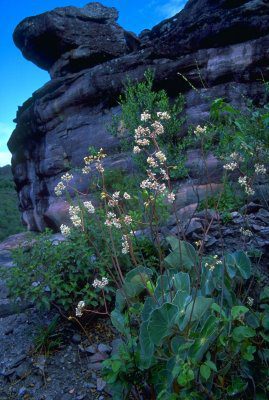 My young plants initially grew well, then some had burn spots on their leaves, some died, and the ones that survived stopped growing or are growing very slowly. I don’t know what the problem is as the amount of sun they receive is the same as before and where they grow in nature the sun is very strong. Here in Belem I am close to the Equator, though. Maybe someone watered them in full sun? Some are still alive, and I am fighting hard for them not to die.

Now, written a few days later, there is good news. Lately, I have given them less sun and more water, and they seem to have improved. Even in their dry habitat they probably get underground humidity from under the rocks.