Begonia rex ‘Putzey’ came into cultivation as a stowaway plant that germinated on an orchid which was imported into England at the height of the Victorian plant collecting fever. It came from Assam, India which is in the Himalayan foothills. It was published in 1857.

There is an entire group of hybrid begonias that the world knows as Rex Cultorum meaning that they can all trace their parentage back to this single plant. In fact, it was one of the plants used in the first wave of Begonia hybridization in the nineteenth century. Despite this fact that B. rex gave its name to an entire class of begonias, the Thompsons, in their BEGONIAS: A Complete Reference Guide classify B. rex itself as rhizomatous, with distinctive foliage, unusual surface and/or unusual coloring, large- leaved.

This rex group was first labeled in print by L. H. Bailey in Gentes Herbarium in 1920.

Through mixing its genes with other begonias, the fabulous array of color combinations we associate with the group came about. The first wave of hybrids was done with other Asiatic species like B. xanthina and its sub-species, B. griffithii (= B. annulata), and B. rubro-venia (= B. hatacoa). Upright, more hardy rex types were developed with the introduction of a tuberous species, B. evansiana. By 1875 hybridizers were using B. imperialis from Mexico and that gave rise to plants with smaller leaves. The use of South African semi-tuberous types by American hybridizers in the 1930s brought about miniature rexes. The metallic reds we associate with the classic rex form was introduced by hybridizing with B. decora, a species discovered at the end of the nineteenth century. 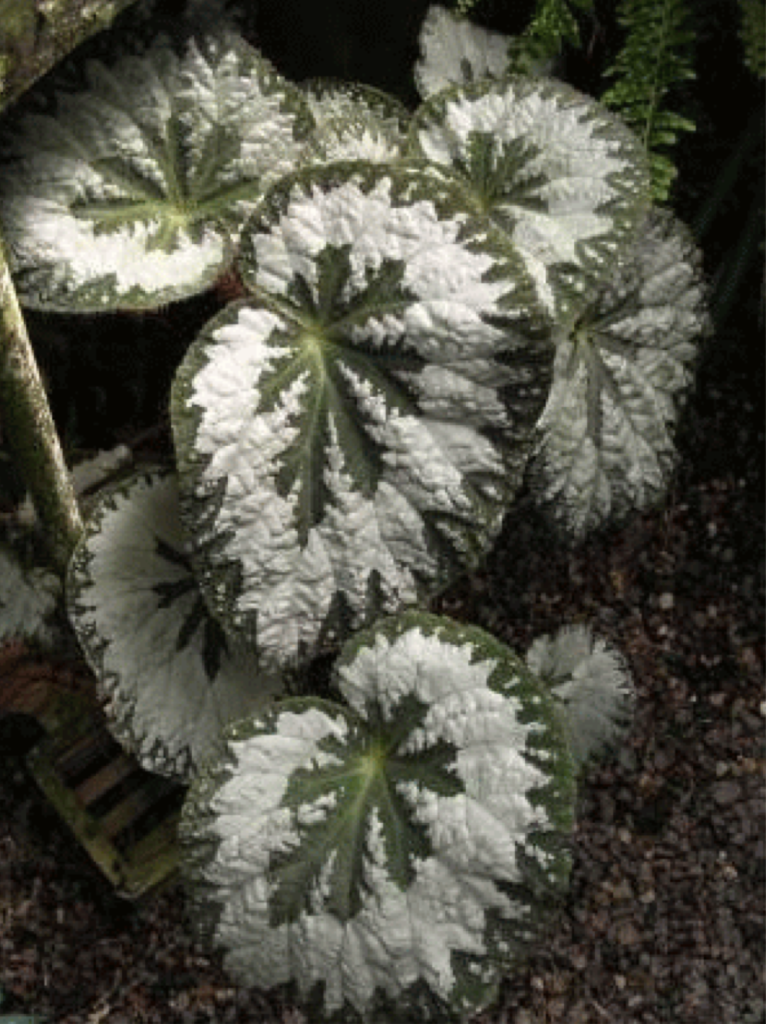 However, based on the cultural requirements of so many of the species parents, including B. rex itself, this is a challenging group to grow in the Sacramento area. Their ideal conditions include an ambient coolness that is best provided at high altitudes with some humidity or areas with a marine influence like Coastal California.

But B. rex can be and is grown in the Sacramento Valley, when bright, indirect light with cooler conditions, like under a greenhouse bench, are provided. In fact, the plant illustrating this article was grown by Branch members Donna and Dick Murrill in their Chico greenhouse.

As to pests and disease, B. rex and the group is susceptible to both mealy bug and powdery mildew, so should be monitored to catch any outbreaks early on.

Tim Anderson of Palm Hammock Orchid Estate in Miami, Florida is hybridizing a whole new line of rex look-alikes from a different set of species parents. This new line is being bred to withstand the heat and humidity of semi-tropical Florida. I personally am having much more consistent success with his plants here in Sacramento. A large group of them include the word ‘Deco’ as part of their name, as in B. ‘Deco Delight.’ Look for them and give them a try.