B. ‘Fireflush’ was introduced to the world in France in 1866 by a hybridizer still unknown. Even crediting Rougier of de Ville de Paris with introducing it to the public may not be correct. At some point this plant was also known as B. ‘Bettina Rothschild.’

Jan Doorenbos published two articles about this plant in The Begonian, one in 1972 and the other in 1975. While generally accepted as being an upright rex, his conclusion was that this is not a rex. Based on literature research and chromosome count, he concluded that it was a cross between B. annulata and B. robusta var. rubra. He further concluded that the correct name should be B. X leopoldii var rubra (Verschaffelt) cv. ‘Bettina Rothschild.’

In 1948 Leslie Woodriff of McKinleyville, California cultivated and released a sport of this plant which he named B. ‘Curly Fireflush’ because of the pronounced double spiral to the leaf. 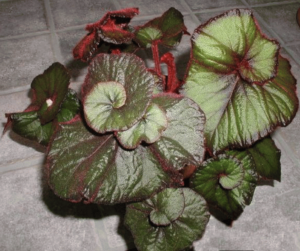 Bessie Buxton, in her Begonias and How to Grow Them (1946) describes B. ‘Fireflush’ under rex. “It is a good grower, keeping its foliage all winter. It is one of the handsomest varieties, . . . It has a dark center and edge, with an olive-green zone, but its great beauty lies in the minute red hairs with which it is covered. When the light touches the dark leaves, the flush with glistening crimson. The young leaves are crimson plush, showing no other color, and the waxen-white flowers are red-hairy on the back of the petals.’ The Thompsons’ in Begonias: The Complete Reference Guide state the flowers are light pink and fragrant. Leaves of both plants are held upright on red-haired petioles.

Culturally this plant needs high humidity to survive. It can be kept under lights in a terrarium, but gets leggy. The leaf color can fade with too much light. It thrives in bright natural light in a greenhouse. Both varieties can be started from leaf cuttings. The Thompsons’ classify this plant as ‘For the Collector.’ B. ‘Curly Fireflush’ seems to be a more temperamental grower.

Despite the fact that Doorenbos found the plant to have 55 chromosomes, there are several named hybrids. From B. ‘Fireflush:’ B. ‘Charlotte Hoak’ and B. ‘Mount Baldy’ (sister seedlings). From B. ‘Curly Fireflush:’ B. ‘Green Pastures,’ B. ‘Riverside Benny,’ and B. ‘Silver Firecolor.’ Interestingly, the first four plants all have B. ‘Pink Lady’ listed as the female parent. B. ‘Silver Firecolor’ is a cross of B. ‘Curly Fireflush’ x B. versicolor.