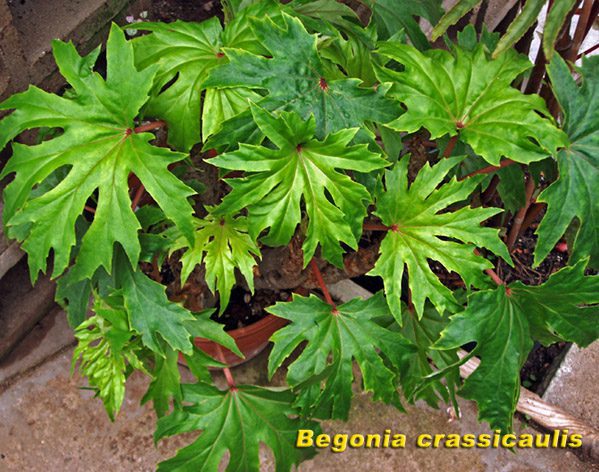 B. crassicaulis was first published by John Lindley in 1842. It is native to Central America, more specifically Gautemala. It is in the Section Gireoudia.

Its habit of growth would make it a thick-stem, most likely non-ramified. I say ‘most likely’ because juvenile plants will grow for a year or two without showing any branching. But very mature plants can occasionally branch.

It exhibits a couple interesting growth habits. The first is that the stems develop what really looks like bark. Most begonias will retain the pattern of where the leaves attached to the stems. In this plant it is very difficult to discern where those attachments were.

The second is much more spectacular. It is the only begonia that I know of that defoliates in the short light days of winter and as spring approaches blooms profusely from the leafless stems. It is quite a sight. The flowers are white and in enough light may show some traces of pink.  If the plant is grown under lights this defoliation may not take place and it will bloom with the foliage present.

The only hybrid done with it that is in the ABS database is B. ‘Bayberry Lane’ hybridized by Joy Porter and released in 1987. The cross as shown in the database was B. U067 (B. bakeri) x B. crassicaulis. She classified the hybrid as rhizomatous. It was registered with the ABS as #946.

Culture is quite easy. The important thing is not to overwater it. If the stem becomes long enough, it can tip over so staking is a consideration. It is not particularly susceptible to any pests.

Morris Mueller reports that it does not start from leaves. The only propagation success he has had is in rooting tip cuttings. Side branches readily grow below the cuts. This is unlike B. kenworthyae which slowly dies back along the stem if a tip cutting is taken.

For further information The Begonian has an article titled Begonia crassicaulis: fantasy or fact in the January-February 1985 issue written by Thelma O’Reilly.