From B. U388 to B. sizemoreae and finally named B. longiciliata 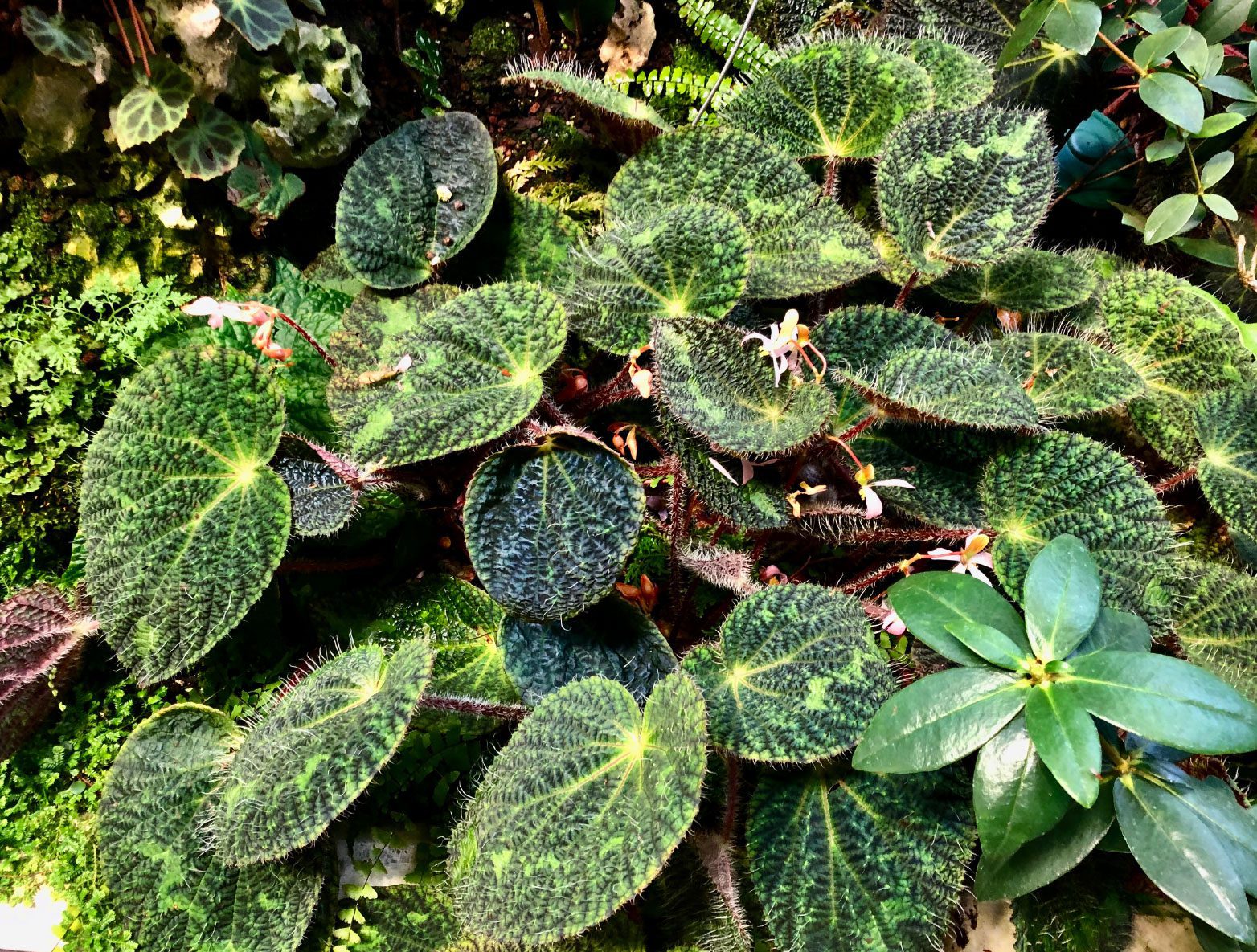 For those of you who are not familiar with U388 here is a little background on a beautiful plant.

B. U388 was collected in North Vietnam November 6, 1996 by Mary Sizemore. It was growing terrestrially on the bank of a river near Hanoi. Mary shared a piece of this new find with a friend in Tennessee, who shared with Don Miller, who then shared with me. In the American Begonia Society’s Unidentified Species Listing compiled by Freda Holley, there is as listing for B. 0388 but no date and no data. Going through The Begonian from 1999 through the latest publication of 2003 the only reference was in 2000. This leads us to believe it was given its number sometime in 2000.

.U388 is a rhizomatous begonia whose leaves and stems are covered with white hairs. The hairs on the leaves are on both the top and bottom. The hairs on the top being very long giving the leaf an interesting appearance. The flowers are pink. The female bloom has a wing on the top when it opens. The largest leaf on my plant has been 8 inches by 6 1/2 inches. It started blooming in September and is still blooming. The one thing I have noticed about the blooms is they drop their petals very easily. Early on I had both male and female flowers on my plant, so I thought I would try to self it. I picked a male bloom and in the process the petals on the female blooms fell off. I pollinated it anyway several times over the next couple of days at different times of the day. I recently harvested the seed pods to let them dry completely. As I mentioned, the female has a wing on top when she opens; after pollination the entire capsule curls under with the wing facing the growing medium. I am now anxious to see if the seeds are viable [They germinated promptly for Tom!].

When I was visiting Don Miller in Dallas I saw this amazing plant growing in a terrarium. I could not hold back my excitement. It was so beautiful! I was told it was U388 from Vietnam. Don generously shared two (2) leaves with me. They rooted easily and made lovely plants. They were both growing in 16 inch plastic saucers with a plastic dome on top. They were both in different areas: one under lights and the other in natural light. They both flourished–blooming, but the blooms never rose above the foliage. For some unknown reason one decided it was no longer happy and died. The remaining plant was under lights and still doing well. One day I notices it had collapsed. The dome had been bumped and it had gotten very, very dry. I removed the dome and watered it out in my garden room. I could not replace the dome until it perked up. I got distracted and forgot all about it. In a few days I remembered and ran to check on it. It was thriving, and looking better than when it was under a dome. I left it off. Some time later I noticed it was getting very full in the saucer so I removed a nice little plant and thought I would do an experiment. I planted the little plant in a Vanda basket. This is a wooden basket in which they grow orchids. I put screen in the bottom to keep the medium in. The medium is a epiphyte mix used for my anthuriums and ferns. The medium is a mixture of coarsely cut orchid sphagnum moss and orchid mix. The orchid mix contains charcoal chunks, stones, and bark chunks. Not knowing at the time where it liked to grow I thought this would perhaps duplicate its natural conditions. I potted it up, attached the wires and hung it up in my garden room. It is growing under a skylight and in front of a window. It gets early morning sun and very late afternoon sun. It’s shaded during the day from the hot sun by an Arizona Ash growing outside. It is checked every other day so it will not dehydrate. When in need of water it is soaked in a tub of rain water. Every other week 1/4 strength Peters 20-10-20 is added to the water. If you attended ‘Begonias International’ and visited my home on Sunday it was hanging over the entrance to the garden room. 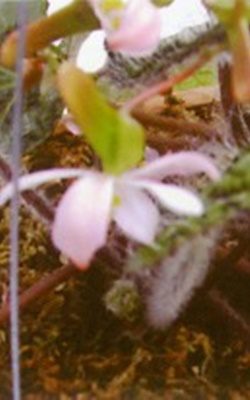 Above is a closeup of the female flower. | Photo: insearchofsmallthings.com 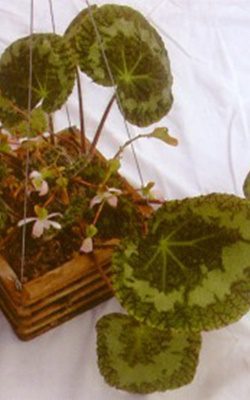 B. U388 in its basket. | Photo: insearchofsmallthings.com

Below is its leaf showing its patterning and the fringe of hairs. The closeup demonstrates the length of the dramtic hairs that decorate the leaf. 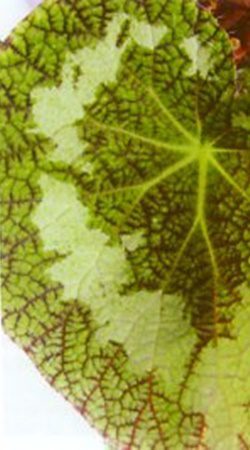 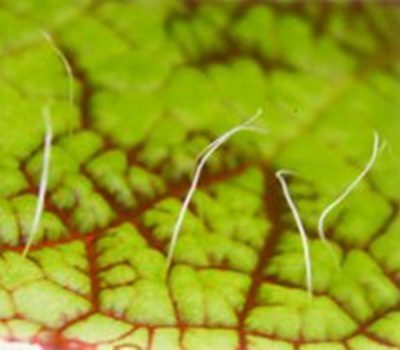 My next project is to take a small plant of U388 and plant it in a moss lined basket filled with a soilless mix. Since I have now learned it grows terrestrially I think it will like this situation as well. When this is done it will be grown out of doors under the shade of the Arizona Ash. I have a feeling that it will be happy this way as well.

I highly recommend this plant for any collection that included Rhizomatous. As you can see from the pictures it is stunning and it really attracts a lot of attention. I have taken this plant to several programs I have given to garden clubs and it is a real hit. 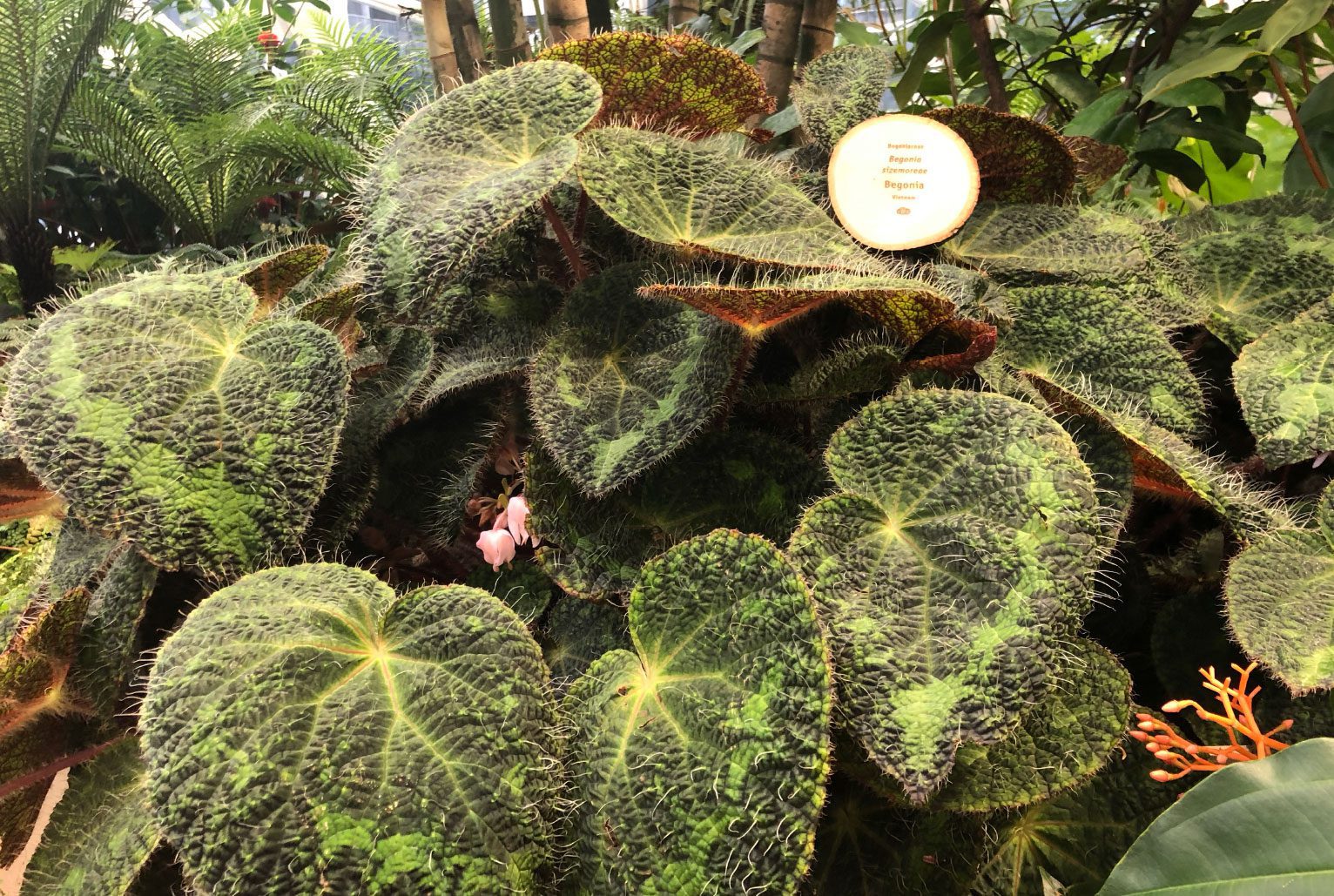