Begonia limprichtii is a small species and you already know how your editor fares with small species. I have tried to grow it several times to no avail either in out of a terrarium. I believe my problem with this as with so many of these is that I am unable to give it the kind of cooler temperatures that it prefers. However, I have seen this begonia at the various ABS shows in very beautiful growth as the photos across the page indicate. It was always in a terrarium and I suspect it would take a very special greenhouse situation to thrive outside of one. Charles and Leora Henthorne are two terrarium growers who have spectacular success with many plants of this type. This one is no exception.

When I grow B. limprichtii in a terrarium, I have used two different mediums. In Oklahoma, I used a charcoal base, covered with a layer of perlite, followed with a layer of soilless potting mix composed of 1/3 sphagum peat moss, 1/3 perlite, and 1/3 vermiculite. To this mixture, I added just enough water to lightly moisten the growing medium. Begonia limprichtii did quite well with no water or additional fertilizer for over a year at a time. I left the container completely covered so the humidity was quite high at all times. It was grown in a naturally light room with no additional grow lights added. It did well and covered the space available in the container. Bloom was very sparse, sometimes not even once a year.

The other method I have used came when I married Leora and moved to Plano, Texas just north of Dallas. Natural light was quite limited for the growing space there and I found that the temperature and humidity which plays such an important role for this plant were also quite different than the growing conditions in Oklahoma.

Begonia limprichtii on display at a show and second a closeup to show the stiff red hairs. 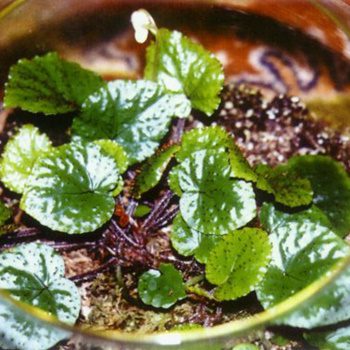 Plants grown by Leora and Charles and photo below by Charles Henthorne.
Growing under artificial light there, Leora has found it much more beneficial to grow this plant in a spaghum peat and perlite mixture, 1/2 and 1/2 of each, over a charcoal base, keeping the medium fairly damp and fertilizing every time it is necesssary to water with fertilizer at 1/4 strength. Even with the artificial light used with this method, bloom remains sparse, again often not even once a year.

Begonia limprichtii does grow well under low-medium light conditions and does not like heat. We find that growing it on the bottom level of the growing cart works best.