At the 1994 “Begonias: OK!” Convention, Don Miller exhibited a plant called B. guttata. It was an elegant plant entered in the Tuberous Division. It had a single stem with a few long spotted leaves that ended in curls. Don kindly shared a cutting with me. Often, learning about a plant and its habitat can help me grow a better plant so I asked Carrie Karegeannes if she had any information on B. guttata. After comparing a leaf of the plant I was growing, and the picture of the dried specimen in Begoniaceae, Smithsonian Contributions to Botany No. 60, Carrie expressed some reservations about the plant being correctly identified as B. guttata. At the 1999 convention in California, two growers, one from England and one from France, felt that my photographs did not look like plants they knew as B. guttata.

The plant I grow as B. guttata was collected by Don Miller and Scott Hoover in Perak Province, Malaysia. Only one individual was observed and collected. It was 4.5 cms. tall and growing at 1500 feet. It was given the Scott Hoover collection #778. The plant was identified by Scott and Don from Henderson’s description in Malayan Wildflowers. According to Don, the first and younger leaves are more like Henderson’s drawing. Scott said he collected another plant in southern Thailand that was similar to this plant, but had solid green leaves.

The plant I am growing fills a 15 inch (20.4 cm.) wide by 12 inch (I 5.3 cm) tall terrarium, and needs to be trimmed periodically to keep it from touching the top. The stems are light cranberry pink or light green with pale cranberry colored vertical stripes that make the stem appear to be cranberry in color. They are succulent and weak, needing to be staked when they are 6 to 8 inches (I 5.3 to 20.4 cm) tall. At times the stems fall over and form roots, and occasionally tubers, at the node touching the ground. The nodes along the stems often form aerial roots. This year, several of the nodes formed “aerial” tubers that are green to beige, covered with wiry, brown roots, and are 0.5 to I centimeter in size. The stems have not branched, even when trimmed or pinched. The large terrarium I am growing has several plants growing in close proximity. So far, only one stem has been produced by each 1 to 1.5 centimeter tuber.

Mature leaf blades can grow to 6 to 8 inches (1 5.3 to 20.4 cm) long and 2 to 3 inches (5.1 to 7.6 cm) wide. Occasionally leaf blades can be as long as 9 inches (23 cm). The leaf shape is narrowly-long ovate with a long acuminate tip that curls under as the leaf matures. It has a cordate base that overlaps or at times is narrowly open. The leaf has a slightly wavy margin. Petioles are 2.5 to 6 centimeters in length. The veins on the top of the leaf are light cranberry and depressed, causing the leaf to pucker slightly. The veins on the back of the leaf blade are raised and are green outlined in light cranberry, or cranberry in color, and have short, sparse, white hairs. The top of the mature leaf blade is medium green with rosy-purple margins, is covered with silver to white spots, and has sparse, widely scattered, short white hairs. Often, new leaves are a rosy-purple and have noticeable short, white hairs.

Stipules and bracteoles are translucent and measure 8 mm in length and 2 mm wide. Bracts are up to one-third larger and are similar in appearance. Most fall off quickly or perhaps decay quickly in the humid atmosphere of the terrarium. There are a few that have persisted and dried.

Flowers appear at any time of the year on new growth. The male flower generally opens first on each inflorescence. The male flower has 4 white to very pale pink tepals with the larger outer tepals containing 6 to 8 cranberry stripes and measuring 8 to 12 mm long and 6 to 9 mm wide. The smaller, inner tepals have I to 3 light cranberry stripes and measure 6 to I 0 mm long and 3 to 5 mm wide. The female flower has 5 to 7 white to very pale pink tepals, generally 6, measuring 9 to 12 mm long and 3.5 to 5 mm wide. Each tepal has six cranberry stripes. The ovary is green with faint cranberry stripes, and has three triangular wings with one larger than the other two. The larger wing measures from 9 mm to 1.5 cm, and the smaller wings from 3 to 6 mm. Blooms are larger in the summer months. Both male and female blooms can be open on the plant at the same time. The flowers have a faint sweet fragrance most noticeable when the terrarium is first opened.

Bloom and growth slow in November to early December. Dormancy usually begins for my plants in mid to late January to early February and last two to four months. Not every plant enters dormancy every year. Plants that are drier, cooler, and older seem more likely to do so. Cuttings taken the previous spring generally do not go dormant, but continue to grow slowly through the winter if kept under lights.

The culture of this beautiful plant is simple. I am growing my plants in four terrariums, all completely closed and placed six to eight inches under lights. Two bask under full spectrum lights; two recently planted terrariums grow under cool and warm fluorescent lights. Both seem to be growing equally well. The lights are on for twelve hours a day. Our basement temperature is in the sixties in the winter and in the seventies in the summer. I arrange a fan to blow across the plant stands in the summer to remove some of the heat produced by the lighting ballasts.

The soil mix is lightly moistened, cut, long-fibered sphagnum moss, over a thin layer of commercial potting mix, over a thin layer of horticultural charcoal, over a thin layer of perlite. This is the first time I have tried potting soil in the B. guttata terrarium, and it seems to have improved the amount of bloom. Fertilization is infrequent since I don’t want the plants to grow out of the container. When I do fertilize, I use a very dilute solution of whatever is in the cupboard and water the soil or foliar feed.

Pests and disease have not been a problem perhaps because the terrariums are tightly sealed.

These plants propagate easily from seeds or stem cuttings.

Setting seed has been a challenge, but I did manage to set some this spring. Some of the seed was distributed at the convention in September to ABS members (national and international). I hope that there are many mystery B. guttata plants growing well for the seed recipients, and that someone can help with a final identification. A very limited amount of seed has been supplied to the seed fund for future distribution.

To help those of us who are growing this mystery begonia, Carrie Karegeannes has translated material from E. Irmscher pertaining to B. guttata and a form and variety of the same. Jack Golding has provided us with a translation of Irmscher’s description of B. phoeniogramma, a plant that has characteristics similar to B. guttata. I would like to thank Carrie, a skilled begonia detective, for her help and both Carrie and Jack for their translations. If anyone wishes to pursue the identification of this begonia, please write me and I will provide copies of these materials and translations A close up of the male and female flowers on Johanna’s plant. | Photo: Johanna Zinn.. 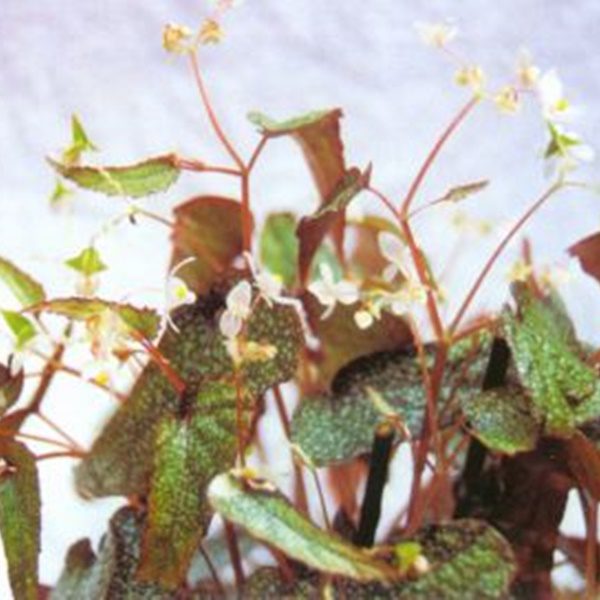