Begonia chitoensis was published in 1977 by Tang-Shui Liu and Ming-Jou Lai. The original citation appeared in Flora of Taiwan, Volume 3, page 793. It was collected in Chitou, Nantou on the island of Taiwan. Ming-Jou Lai also collected this species in Pahsien-Shan, in Taichung, also on Taiwan. Liu and Lai named it B. chitoensis for Chitou.

B. chitoensis first came to America in January 1984 by way of seeds, which were sent to Millie Thompson by Yi-Shan Shui, a horticulturist who lived on Taiwan. She sent seeds of several species that grow on that island.

Taiwan is off the Southeast coast of China. Nantou and Taichung arc near the middle part of the island. Summers are hot and humid and winters are warm to hot. Rainfall is 40 or more inches annually with much more rainfall and lower temperatures in the mountainous areas. 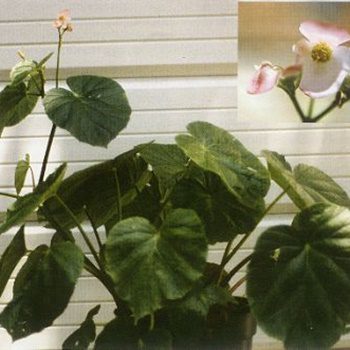 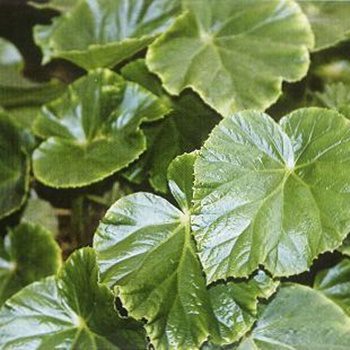 B. chitoensis is a rhizomatous begonia with erect stems. In the early stages there is a creeping rhizome and as the plant matures the erect branching stems appear. It is said that these stems can grow to two feet in the wild.

The ovate medium green leaves are on a long petiole and measure 8 by 5 inches; the base is cordate – heart shape with a small overlap. The leaf margin is denticulate – finely toothed. There are eight to ten main veins.

The flowers are brilliant pink. The male flower has four tepals; the outer tepals are larger than the inner tepals. The female flower has five tepals. The ovary is three-winged and the back wing is much wider. Bloom time starts in June and ends in October. 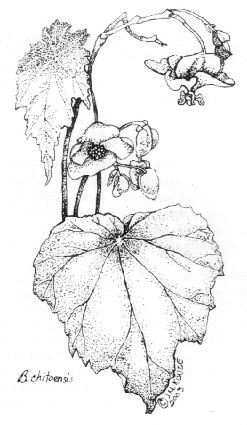 Filtered sunlight is preferred in the summer; in winter the amount of light should be increased. Millie Thompson says that the ideal temperature for this plant is between 58 and 62 degrees with humidity at 55%.

This article first appeared in The Buxtonian, newsletter of the Buxton Branch edited by Jane Snellman. The lovely drawing is by Buxton member Jeanne Marie Kunze.