Another Look at B. sceptrum and B. aconitifolia

I am not an expert on begonias. I did not study this field in college. I am a self-taught hobbyist who has been growing (and learning about) begonias for about 25 years. During a visit to the Ft. Worth Botanic Garden I made some comments regarding B. sceptrum and B. aconitifolia, and the editor of The Begonian asked me to write this article.

A lot has already been said and written about these ‘two’ plants. For years there has been some confusion in Begonia circles regarding this (these?) species. Are they the same, or are they different? Having grown them for many years, I offer here my observations. 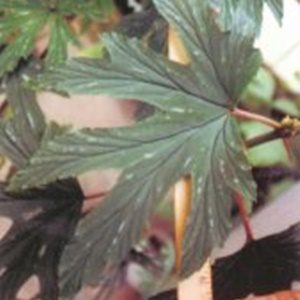 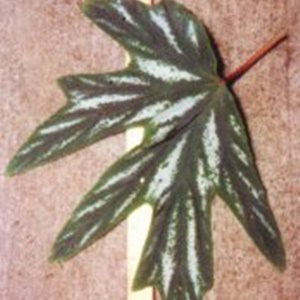 To begin with, let me say that I obtained my plants from different sources. In each case, they are grown side by side in order to eliminate such variables as light, water, food, temperature, humidity, etc. While both are considered Superba canes, B. aconitifolia has a taller and more decidedly upright habit of growth. It reaches 5 ft. to 6 ft. easily. B. sceptrum is also a tall growing cane, but mine stays slightly smaller, usually 4 ft. to 6 ft., and while it is clearly a tall cane, it seems to have a “shrubbier” habit of growth than does B. aconitifolia. B. sceptrum has thinner, more zigzag-like stems that branch rather freely.

I am of the opinion that B. sceptrum and B. aconitifolia are two different variations of the same begonia species. Those of you who attended the 1997 ABS Convention may have heard Dr. Kathryn Burt-Utley address this very issue. There is some precedence to her position. I found a reference to a 1686 edition of Historia Plantarum where John Ray called them 46 accidental variations and not much as to distinguish a species.” While it is not my intention to get into an area where I am clearly unqualified. 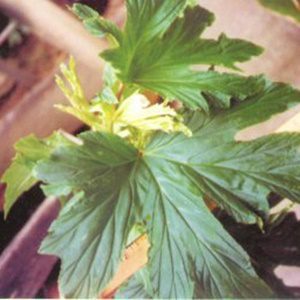 I believe that Dr. Burt-Utley (and others) would consider all the “differences” I have noted in this article to be acceptable differences within the species, and not two different species.

Can you believe it? The experts do, in fact, agree with me! They arrive at their conclusion somewhat differently, however. They study flower parts in minute detail (small differences still being acceptable); something I, as a hobbyist, am not qualified to comment on. My conclusions are based on visual overall appearances and habit of growth.

Which now brings us to the name: What should we call them? Jack Golding, the ABS expert and authority on nomenclature has provided me with references regarding the proper name of this species. The correct name is Begonia aconitifolia A. de Candolle, named in 1859. Begonia sceptrum hort ex Rodigas, named in 1884 was later determined to be the same species and therefore is a synonym. What that means to the experts is, B. sceptrum is incorrect, and that both of these forms are correctly named B. aconitifolia.

However, Mr. Golding, in his article “Begonia Species are Variable” (The Begonian, January/February 1992, p. 10-12) does concede that while this might be logical and practical for the botanist, “a horticulturist needs to be able to name a distinguishable variant from others of the same species.” As it is my opinion that both variations present consistent, persistent and distinguishable characteristics, I feel that they meet his criteria for two names. In my greenhouse they will be B. aconitifolia and B. aconitifolia (Syn. sceptrum).

Well, so that settled it, right? Boy, I sure am glad I cleared that up! Ha!