It has been relatively difficult to obtain the latest overseas hybrids in Australia. This is because of our tough and costly quarantine procedures. We cannot import plants with soil or peat on the roots and all of our imports are subjected to methyl bromide treatment. This also includes cutting material such as leaves and stems. If the plants survive this, they are then kept in quarantine glasshouses for 3 months with inspections on entry and exit for disease or pest problems. This “service” is charged for at “user pays” rates. Plants eventually introduced this way can cost the importer hundreds of dollars. The only other option is to bring them in as tissue cultures which is allowed after an initial inspection. Because such new hybrids are rarely in tissue culture few have entered Australia in this way.

This has been a major factor in the growth of hybridizing here. We see and hear about wonderful new cultivars particularly in the USA and Japan and seek to emulate that in Australia. There have been many beautiful new Australian hybrids over the years with many wonderful hybridists producing them. This article will concentrate on four Aussie hybridists of more recent times. Each was asked a series of questions and their answers form the basis of this article. Lyla Kilpatrick has been hybridizing for about 15 years and is based in Western Australia. Lyla originally began hybridizing because there were so very few varieties in the west. John Clare has a keen interest in begonias and began hybridizing about 10 years ago after ceasing full time work. John lives in Queensland. Philip Wright practices his hybridizing techniques in Victoria. Philip was persuaded to try raising new varieties from seed and has been growing begonias since the early 1970’s. Ross Bolwell has a wholesale nursery in New South Wales (NSW) and has been growing begonias for 30 years. Slowly the wholesale side of this business has made way to concentration on retailing begonias via mail order.

Lyla now produces new varieties for the joy it gives her and the chance that it might just produce a worthwhile new plant. She does not look for any particular characteristics, just different and very beautiful plants. This is clear from the magnificent plants we now have because of her efforts. She has concentrated mainly on rhizomatous and cane-like varieties. Lyla’s favorite Begonia parent plants are B. ‘Lenore Olivier’ and B. ‘Baby Dress’. She cites the reasons for using these plants because they “bloom over a longer period than many begonias and are so available. They are also very ‘willing’ and usually produce attractive, strong hybrids.” Lyla had some difficulty when asked what her favorite Begonia hybrid was, finally deciding that B. ‘John Tonkin’ must be near the top. “It has large dark glossy leaves with huge umbels of pearly pink blossom. It is a strong grower producing many basal shoots, grows to medium height so doesn’t require as much staking as some and is fairly resistant to mildew.” Lyla’s most recent interest is in the Hiemalis group of begonias. 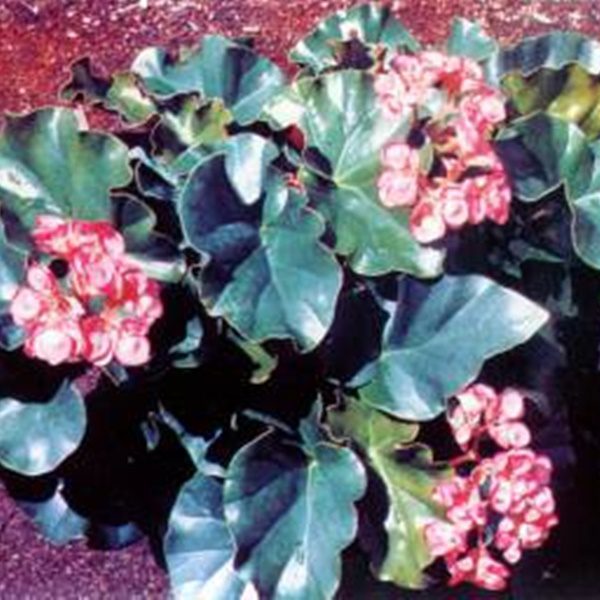 Lyla Kipatrick’s B. ‘Alice Faye’ is one Aussie hybrid that has been glimpsed at ABS sales in the US. | Photo: Tony Watts.

John has over 100 named hybrids in circulation and has mainly worked with rhizomatous begonias. He has produced a few thick stem types and more recently has turned his attention to cane varieties. John looks for good leaf color, shape and a compact habit. He also wants plants that are free flowering which provides more opportunities for hybridizing. Vigorous growth is another requirement John seeks in his breeding parents. He finds it “interesting to watch plants you have picked out change color and leaf shape with every new leaf.” John cited several parents he uses most, but did explain that he changes parents every year or so to avoid too many look alikes. Some of these parents are B. ‘Morning Mist’, B. ‘Bedford Delight’, B. ‘Sisquoc’, B. ‘Star Gazer’, B. ‘Tiapan’, B. ‘Dragon Wing’, B. ‘Griselda’, B. lindleyana and B. wollnyi. 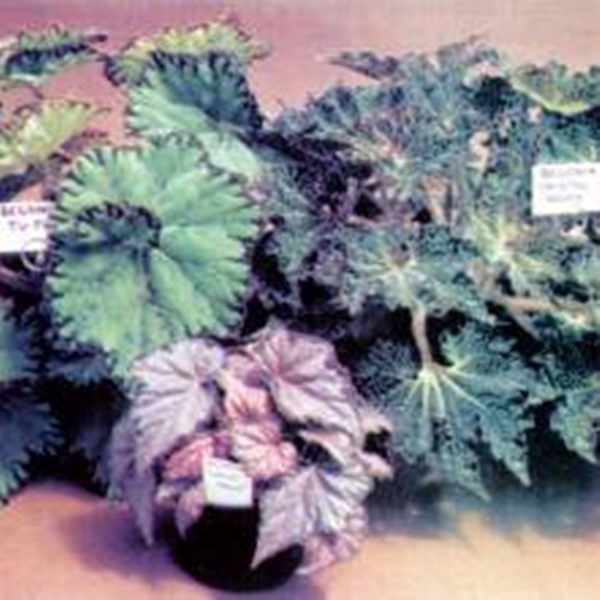 Philip is a foundation member of the Victorian Begonia Society and has a keen interest in hybridising tuberous begonias. This stemmed from his first attempt at growing these beauties from seed. Philip has stuck to a long term plan which was “to increase the range of yellow hybrids, salmon reds, and introduce more general vigour, health, stronger stems and flowers to hybrids that would cope with the higher temperatures we experience in the summer.” This of course required a good deal of research into the breeding background of the parent varieties. More recently Philip has been working to introduce more perfumed types by crossing seedlings obtained from Howard Seibold in the USA with other named clones in his collection. Philip’s work with yellows continues. Philip says hybridizing “can cause some heartache, but more often than not you obtain rewards if you select your parents carefully, and also your seedlings … patience is a necessity.” Some of Philip’s hybrids are: B. ‘Carolyn Dawn’ (Flushed yellow apricot, an unusual color.); B. ‘Penelope’ (Soft primrose yellow with many petals, pendula.); B. ‘Beulah Powell’ (A rich yellow.); B. ‘John Henderson’ (Yellow hybrid with multi wavy petals.); B. ‘219’ (Rose formed soft pink); B. ‘Jim Curtis’ (Strong upright salmon red.); B. ‘Bronwen Huxtable’ (Very strong, crimson red); B. ‘401’ (Wavy salmon red.); B. ‘415’ (Large salmon red.); B. ‘Maplewood’ (Cyclamen pink with white reverse picotee.) 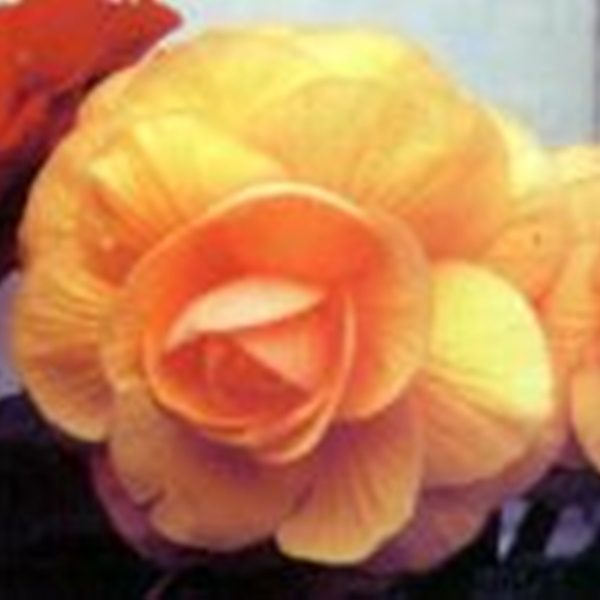 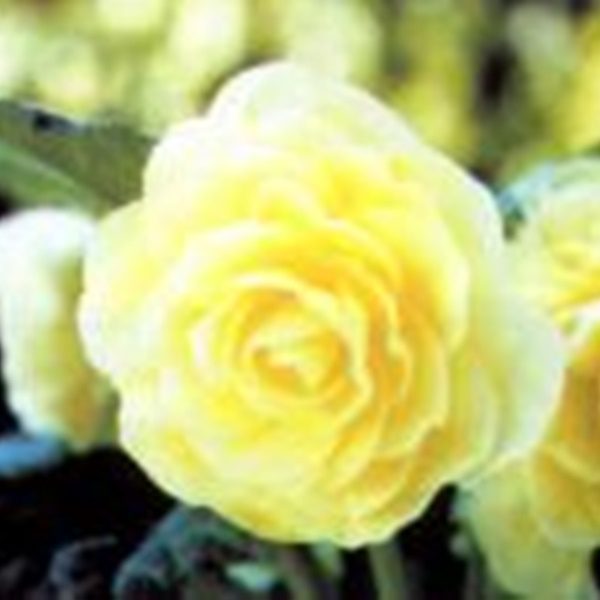 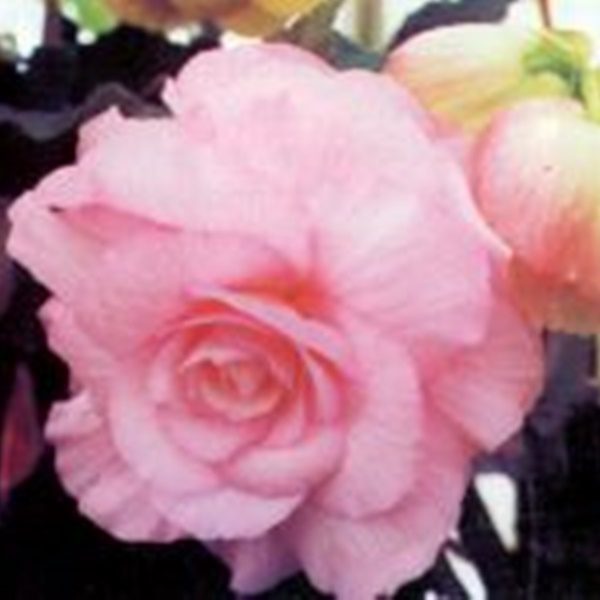 Ross has been hybridizing begonias since 1981. He specializes in rexes and canes, but has produced some rhizomatous, shrub and trailing hybrids. Driven by his commercial need for new varieties he has introduced hundreds of rex cultivars. Cane begonias are his primary interest. Ross wants to produce disease resistant, compact growing, free branching, free flowering canes that have large flowers and fragrance. A good strong growing yellow flowering cane is one particular aim. He also likes to produce primary hybrids from different species and one of these vigorous plants was named after him by members of the NSW Begonia Society. B. ‘Ross Bolwell’ is a hybrid from B. carolineifolia B. thiemei. Ross has many favorite hybrids, but his choice for overall favorite is B. ‘Annan Belle’ an unusual cross with flowers in a beautiful shade of burnt orange-apricot. Unfortunately this plant appears to be sterile.

Many in the U.S. know Ross Bolwell for his canes, particularly B. ‘Flamingo Queen’, but the unique B. ‘Think Pink’ is also his. 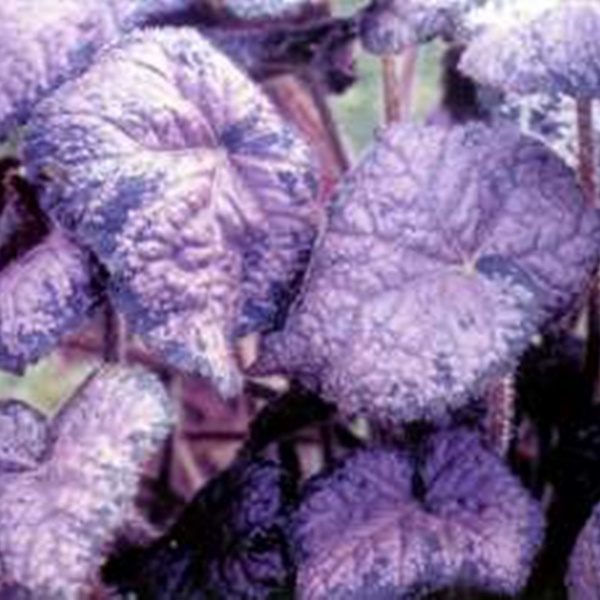